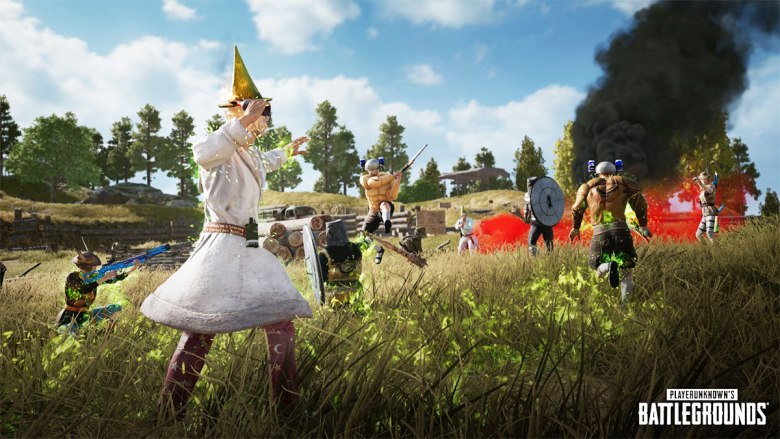 The PUBG Fantasy BR Event details is a fun new April fools event that adds something a bit different to PUBG. Take on players with new medieval classes, abilities and weapons.

The event is just a bit of fun using existing in game resources without taking away from future update progress, however the event is also being used to test out some new features like crafting.

The fearsome Barbarian is a melee combatant with high HP who uses his rage to increase his movement speed. Swinging his Kick Ash Longsword in a wide arc in front of them, they gain additional movement speed with each successful attack on an enemy.

Barbarians also produce Mega Energy Drinks, which can be used to recover large amounts of HP over time. Although he doesn’t have any other special attacks or skills, his fast movement speed makes him the best suited to chase down squishy opponents and show them the business end of his weapon.

The Ranger is a long-ranged sniper equipped with the deadly ‘Dragonslayer’ crossbow, capable of firing multiple shots in succession. With a long range and high attack damage, she is a formidable opponent, other than her rather low amount of HP.

Ranger’s utilize stealth to emit no movement sounds, making them the perfect sneak attack class. The Ranger brings utility to the fight as well with their Flash Powder grenades that temporarily blinds enemies and decreases the damage allies receive.

Wizards are heavy damage dealers who rain down fire on groups of enemies at once. Whether firing 2 consecutive blasts from their wands, dropping a powerful Fireball spell, or calling meteor showers from the sky, Wizards always have something fiery and explosive to pull out of their arsenal.

Keep your allies close though, as the Wizard has the lowest HP of any class and make a delightful squishing sound that Barbarians find irresistible.

The Paladin is the key healing class in Fantasy Battle Royale. Healing allies with their Mendingstar and blocking incoming attacks with their Brooklyn Shield, the Paladin is right at home protecting the weak.

The Paladin’s Mendingstar serves two functions; healing allies it strikes or dealing damage to and slowing down enemies. The Paladin’s Shield Charge can also knock away enemies who get too close to his party.

Paladins also regularly produce First Aid Kits that can be given to allies or toss a ‘Heal Bomb’ to create an AoE healing zone, but be warned that this zone can also heal enemies!

One slight hitch though, maybe it’s because of their heavy armor or the fact that they have no free hands, but Paladins cannot ledge grab and may have to find more creative ways to keep up with their team.

In Fantasy Battle Royale, players start the game with a class-specific weapon, necklace, and ring equipped. These items are exclusive to your character and cannot be dropped or traded.

Some classes have ammo and special skills that they can use. These are automatically refilled in specific intervals depending on the levels of your equipment. There is a cap to how many of each you can hold, so make sure to use em if you got em!